We left Malaysia on 18 August ’84; landed on the 19th.  It was winter and I only had a thin coat on.  I remember thinking I had never felt so cold in my entire life – the wind seemed to cut right through to my bones.

We were to stay with my brother Phin and his family out in south-western Sydney until my parents found a place.  Back then, it was where the influx of refugees from Indochina were headed, and this had created a hostile climate in the country.  It wasn’t that long ago that the country had embraced a White Australia policy, after all, and for the first time in its history, it was having to deal with mass numbers of boat people coming in.

There was a lot of incendiary racial talk in the media.  Prior to our arrival, my eldest sister, Ming Lee, had advised us to be prepared for all eventualities, including being confronted by the media on arrival at the airport for our views on racism in Australia.  Terrific, I thought. I didn’t even want to be here.

The morning after we arrived, while sitting to breakfast, Phin’s wife, a social worker, told me about this racist flyer she’d found in their mailbox.  It called for all Aussies to run down any Asians they saw in the street; better to do it now or you’d regret it later.  Stop the Asian invasion, screamed the graffiti that greeted my first days in the country.

My eldest sister lived in the more genteel north-western suburb of Carlingford; most Malaysian professionals had chosen to settle down in that part of Sydney after tertiary education at Australian universities.  And they had arrived in the country back when Asians were so rare they were treated as novelties, not threats.

My parents, my younger sister and I, on the other hand, were stuck in the hotspot of racism in the country.  We were being lumped into the same boat as the desperate, war-stricken, non-English-speaking Indochinese, here, as the racists saw it, to threaten the Australian way of life and leech off the welfare system.

Awesome.  I didn’t want to leave Malaysia, and I’d now landed in a place where I wasn’t welcome.  Could things get any worse?

I had a boyfriend back home.  We’d been together since we were 16.  We thought we were going to get married and live happily ever after.  I wished at the time my parents applied to emigrate that I was already 18, so I didn’t have to leave if I didn’t want to.  He wanted me to stay behind.  He’d quit school and take up a job and take care of us.  And yet, despite everything, that was not an option.  Whatever else you could say about our upbringing, it was never a question as to whether I’d go to university; it was a given.  I think maybe it was my mom’s academic genes passed on to her kids.  I could not fathom not pursuing further studies, and that would not be possible if I were left behind.

I had become famously rebellious ever since I turned 15; that combined with my personal circumstances meant I was very bitter about coming to Australia. For me, the next two years would be a living hell. 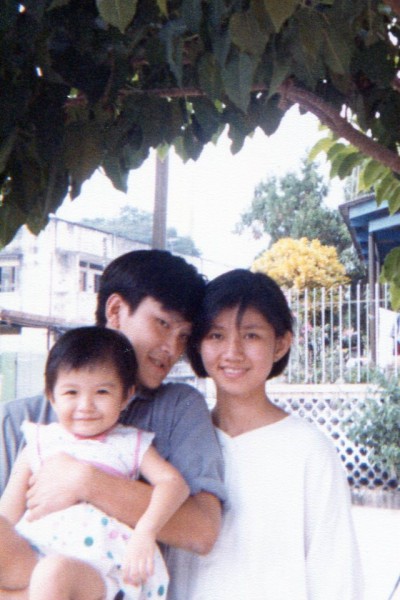 one of my last photos with my boyfriend and my niece.